This is a poem I wrote in 2018, shortly after my uncle relapsed and overdosed on heroin. He had been released from federal prison only a few short months earlier. I was devastated and angry at the injustice of his treatment as a Vietnam vet who struggled with addiction. From my standpoint, he gave his entire life to America from a very early age. He didn’t get any help for the trauma or rehabilitation to kick the nasty habit he developed overseas while watching his friends perish. Instead, he was given long sentence after long sentence in federal and state prisons.

It needs to be said that this is my view on things. Although my uncle was dealt a hard hand, I never once heard him complain or blame anyone or anything. But I do feel it’s necessary to recognize the way being forced to go to war at such a young age–or any age for that matter–severely impacts people. The battle scars never leave and so many people simply don’t have the tools to make the comeback and do the healing work. Reintegrating into society becomes harder than ever and many people are active in substance abuse as an attempt to cope. I happen to know my fair share of them.

This one is to help give a voice to folks like my Uncle Rob and any soldier or fallen soldier. It’s dark;  some things just can’t be stated in any nicer or subtler way.

Red, white and blue like the flag we went to raise

Red like the coagulants in the needle I stuck in

White like the Christian small town full of heroin

Spent all my life in the joint

cause I robbed banks at gun point

Who taught me to raise a firearm?

Every day, I had to bear arms

and when it was over,

I shot into my arms

Maybe I wanted to be disarmed

Maybe I wished to be safe from harm

Maybe it was time I bought the farm

If you thought Vietnam

The ideals of your nation

are not “under God”

but now I am

But I pray that you’ll find your own, at least make a start 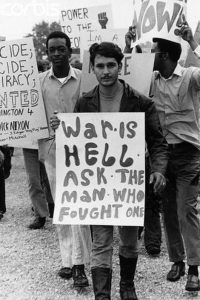